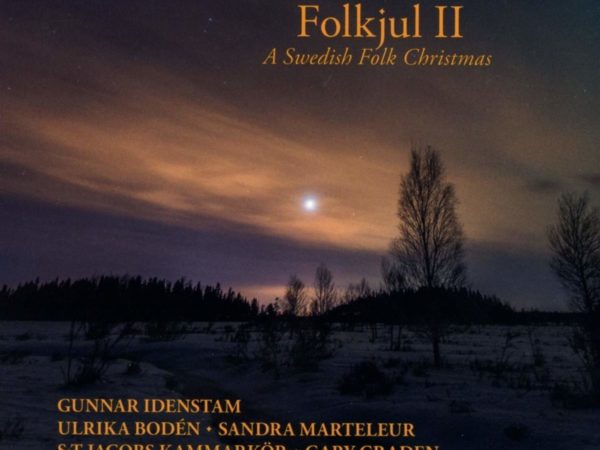 Well into the previous century Sweden was largely a peasant society with folk music an integral part of daily life. There were work songs, narrative ballads and, obviously, music for dancing. Over the centuries a not always easy coexistence between religion and folk culture developed, with hymns being adapted to a folkmusic aesthetic while popular traditions were given a Christian veneer. An example of the latter is the rich store of ‘Staffan ballads’, springing from a pre-Christian horse cult but given a new slant as its focus shifted to St. Stephen – the first Christian martyr. Gunnar Idenstam and S:t Jacobs Chamber Choir have performed their Folkjul concerts more or less every year since 2002. The concept stem from a rich interplay between ‘folk culture’ and ‘high culture’ and in Idenstam’s arrangements a newly composed halling or polska entwines itself round the old Christmas melodies. The first Folkjul album was released in 2007 – this time the choir and Idenstam are joined by violinist Sandra Marteleur and Ulrika Bodén, one of Sweden’s most well-established folk singers.

Individuality is one word you could append to the Swede Gunnar Idenstam, whose organ improvisations occupy their own universe – part hard apocalyptic rock, part elfin folklore, part nave-shaking French Symphony. Folkjul II is a follow-up to 2007’s ‘Folkjul’ (‘Folk Christmas’) but if you haven’t come across Idenstam’s exotic art before, I’d heartily recommend this ‘Songs for Jukkasjärvi’ (BIS). ‘Folkjul II’ trades that album’s herding yoiks for chorales and carols, similarly embedded in the Idenstam sound of folk flutes and fiddles, electronics and voices, all of which are egged on to spine-tingling climaxes by Idenstam’s capering, roaring organ (an acquired taste, I can hear som saying). Sandra Marteleur’s fiddle ariosos have a strange wonder, Ulrika Bodén’s vocal solos are mesmeric, Idenstam’s touch on the organ is as funky as it is majestic, Gary Graden’s St Jacobs Chamber Choir sounds full-bodied and bright. There are special moments and ground-moving modulations around every corner. But it doesn’t dilute the experience, nor the deep sense of mystery, that you often know from the start of many a piece – as in the pregnant organ rumblings that open Frän (sic) himlens höjd  – that an almighty climax is in the pipeline. It is the journey to Christmas encapsulated.

Please don’t take the absence of titles as evidence of any indifference on my part, because this is the most engaging of the live seasonal stocking-stuffers Santa sent my way this year. I didn’t list the titles because nearly all of them are in Swedish, and who needs a
heading full of Os with lines through them and words we don’t understand? But this is wonderful stuff.
The hymns, ballads, carols and other seasonal ditties are performed with rustic flair by the singers and the violins, organs, flutes, and pipes that accompany them. Each arrangement exploits the vivid splashes of color the instruments can produce, while the
singers convey the shifting styles of the music with exemplary commitment and skill. One minute, they’re crooning the most shimmering ‘ln Dulci Iubilo’ imaginable; the next, they’ve iumped into a Scandinavian hoedown in full spate. BIS captures it all in bright, colorful sound, and the booklet explains all. God Jul to all who had anything to do with this happy and spirited release!

Christmas hymns and chorales. St Jacobs Chamber Choir et.al. BIS 2334.
Put on some warm knitwear and pop this disc in for the ultimate
Swedish Christmas. The joyful, jaunty mix of hymns and chorales, with folk twist is sure
to make you smile.
(RI) ++++

The booklet of this beautifully-presented disc opens by explaining the “not always easy coexistence” between the folk culture prelevant in Sweden over the past centuries and “high culture”, often of a religious nature. This disc attempts to bridge this gap with respect to Christmas music.
The disc opens traditionally with choir (the most admirable St Jacobs Kammarkor) and organ (played by Gunnar Idenstam) performing the old Basque carol Gabriel’s Message, used by the choir in their performances of the Folkjul repertoire as a processional hymn. It immediately sets the bar high for quality of performances.

The second track aptly demonstrates the aim of the disc as set out in the booklet notes. This combines a traditional hymn – All Hail to Three, O Blessed Morn – sung by choir and interwoven with folk melodies played (very well indeed – none of the scratchy tone that sometimes can come with the folk territory) by folk violinist Sandra Marteleur, and with one verse sung by folk singer Ulrika Boden. You feel it shouldn’t work, but it does, and it is infectiously joyful.

After In dulci jubilo we have a Staffan ballad – with its origins in a pre-Christian horse culture which then converted – as so many pagan elements were subsumed by Christianity – into worship of St Stephen, the first Christian martyr and, neatly, claimed by legend to be King Herod’s stable boy.

Ulrika Boden also appears as a flautist playing the fipple flute in, for example, Polska by Viktor Gabrielsson, which is perhaps the most saccharine work on the disc. As well as arrangements of traditional works, we also have a few modern compositions, such as A Gangar with your Coffee by violinist Sandra Marteuleur, written as a wedding gift, or A Polska for Christmas, another work written as a gift, this time by Gunnar Idenstam.

A Star Shines bright is a traditional folk song which is full of atmosphere, and in which the organ works surprisingly well as a background folk instrument; while another Staffan ballad is combined with the Musette from The Notebook of Anna Magdalena Bach. In A Star Passed Across the Sky Idenstam has taken a mediaeval carol, combined it with a folk-like tune, and then at the end converts it into a Swedish polska, which, again, works very well indeed. This is followed by The Blessed Day – a traditional performance of a Scandinavian song to a tune from the far north of Sweden.

The disc concludes with the well-known Lutheran Christmas hymn From Heaven Above, which Idenstam combines with a new folk melody; this builds up to the most tremendous climax at the end, and when Ulrika Boden joins the choir, thundering organ and nimbly weaving violin with kulning, the emotional impact is almost overwhelming.

In essence, this is a brilliant disc. All the arrangements – made by Gunnar Idenstam – work really well. Part of the reason for this may be the judicious use of a single instrument – the violin – representing the instrumental folk element and weaving around the choir; possibly it is also because the violin line is very rhythmically defined and adds something harmonically too; and it is also because the choir sing so mellifluously. The ensemble of the St Jacob’s Kammarkor is spectacularly good for a church choir. The organ playing impresses as well – Idenstam is always there, exactly on time, whether accompanying choir or dancing with the violin. The two folk musicians are on top form too, making this an exceptional, truly unusual and thoroughly enjoyable disc for Christmas.

A different take on Personent hodie is included on a BIS album entitled Folkjul, which does exactly what it says on the tin – Christmas music in
Swedish folk-music style. (BIS-CD-5031, reviewed as 24/44.1 download with pdf booklet from eclassical.com). Gunnar Idenstam (organ and
arranger), Lisa Rydberg (violin), Sofia Karlsson and Emma Härdelin (vocals) and the St Jacob’s Chamber Choir are directed by Gary Graden. Most of
the music will be unfamiliar to UK and US ears and even the familiar items are sung in Swedish, with texts and translations provided. Es ist ein Ros’
entsprugen becomes Det är en ros utsprungen, and Stille Nacht is Stille natt, for example, which is pretty easy for even those devoid of any Scandinavian languages to decipher. Familiar or otherwise, it adds up to a very enjoyably different Christmas offering.
Göran Forsling appreciated all but the final setting of Veni, veni Emanuel, concluding in kulning style on the final track – review. Yes, that is a bit much – a lot much, in fact, so I recommend ditching that one track.
That was recorded in 2007, so quite a wait for its successor, Folkjul II; Ulrika Bodén (vocals) and Sandra Marteleur (violin) replace their equivalents, but
the other performers remain the same (BIS-2334 SACD [73:21]). With brilliant timing, the SACD seems to be out of stock in the UK – all the more
reason to download the 24/96 version, with pdf booklet, from eclassical.com. Once again familiar music appears in unfamiliar guise – Wie schön leuchtet
der Morgenstern as Var hälsad sköna morgonstund, the first verse in a NorthSwedish dialect, and the music borrowed from a traditional Norwegian male
dance, accompanied with the violin sounding like a Hardanger fiddle. If anything, I liked this even more than its predecessor. Better still, 24-bit can be obtained for the same price ($10.98) as 16-bit initially. Be warned that the final track contains more of the kulning singing that upset Göran Forsling, though
his time with just one voice, not two, and less obtrusively.

Christmas Music Past and Present
A short survey by Brian Wilson

The metaphysically suggestive sonorities of nine of these 17 selections arise from the 28 dynamics-spanning voices of Stockholm’s S:t Jacobs Kammarkör and Gunnar Idenstam’s rumbling Allen Q350 digital organ. The metaphysicality of the changes of pace, whether sprightly or hushed, owes a good deal to the lithe expressiveness of Ulrika Boden’s voice and Sandra Marteleur’s violin. “In dulci jubilo” provides the melody most likely to be recognized by non-Swedes. The full-ensemble rendering of Martin Luther’s “Från himlens höjd” will leave even the garrulous speechless.

Folkjul II: A Swedish Folk Christmas (BIS) Here’s another fine-sounding high-resolution recording with unusual fare, at least for North Americans. Gunnar Idenstam and the St. Jacobs Chamber Choir (St. Jacobs Kammarkör) have performed Folkjul concerts more or less each year since 2002.
Reflecting the sometimes uneasy merger of Swedish peasant folk culture and Christianity, the concerts mix old melodies with others newly composed. I love the juxtaposition of light folk instruments with the organ of Eric Ericsonhallen in Stockholm. Less comforting is speculation about what die-hard Christians did to peasants who refused to sign onto the program. But you won’t hear any of that amongst these lovely selections.